“Whatever the inheritance of work in this life, we are only the apex of innumerable lives of endeavor and sacrifice. Where we have come from, the struggles of our parents, our ancestral countries, their voyages, and hardships are immensely important.”
–-David Whyte

Between 1910 and 1940, Angel Island in San Francisco Bay was an immigration station to for people arriving from 84 different countries, including some European countries such as Italy, but the majority of detainees there were of Asian descent. At the station, people were detained for inspection of parasites, as well as to be disinfected. The duration of time spent at Angel Island varied from two weeks to two years. Depending on your race and social class, you could be required to stay longer. Separated from family and wanting to work, but waiting for clearing from authorities in charge was painful to bear. Life went on, but action was suspended for those who waited, and they did not know when the endurance trial would end.

Inside Barracks at Angel Island

The contributions to the US from people of Chinese descent are significant. Their labor on the transcontinental railroad, for example, accounted for 90% of the workforce, according to Michael Hiltzik’s article in the Los Angles Times, “Chinese immigrants helped build California, but they’ve been written out of its history,” and as Hiltzik explains, the railroad “couldn’t have been built without their labor, and “without the Central Pacific [railroad] the history of the American West and California in particular might have been very different…They were low-paid laborers, denied a path to citizenship, victimized by violent reaction, yet without them America would be a different and a poorer place.”

Though their work was in important to the development of California and the US, people of Chinese descent weren’t allowed to become US citizens, and “were accorded no voice,” writes Gordon Chang of Stanford University. “We cannot hear what they said, thought, or felt.”  I imagine this is also much the case for many seeking their way into places, countries, and cultures where they are seen as the outsider, even though what they could contribute is needed in the places they are seeking harbor. Hiltzik states that Stanford himself in his inaugural address as governor in 1862, when described the Chinese living in the US ‘“an inferior race … a degraded and distinct people” exercising “a deleterious influence upon the superior race.”’ We do have some remnants of the Chinese’ voices, however, Hiltzik states–in oral stories, songs, and poetry. At Angel Island visitors can get a glimpse of Chinese detainees’ experience and thoughts through reading the poems they wrote there on the walls reflecting their depth of frustration and sadness. 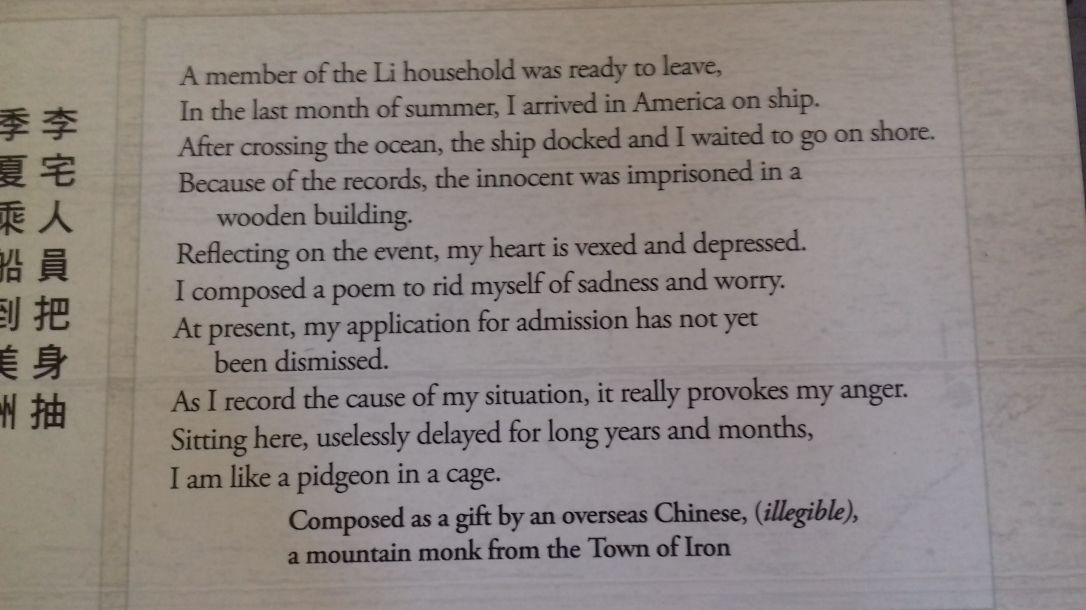 Amidst the sorrows the detainees express, beauty also resides in their words, as well as wisdom. According to information available to read at Angel Island, the poem below (author not stated) was written in Chinese language in a form of eight lines using couplets, parallel syntax, and tonal alteration.

The west wind ruffles my thin gauze clothing.
On the hill sits a tall building with a room of wooden planks.
I wish I could travel on a cloud far away, reunite my wife and son.
When the moonlight shines on me alone, the night seems even longer
At the head of the bed there is wine and my heart is constantly drunk.
There is no flower beneath my pillow and my dreams are not sweet.
To whom can I confide my innermost feelings?
I rely solely on close friends to relieve my loneliness.

Often, it’s poetry that people turn to as an expression of resistance and protest. In its use of metaphor and conciseness, poetry empowers people. Because poetry thoughtfully considers the use of each word–the connotations and denotations, the tone, mood and baggage words carry with them, poetry is an antidote to the way words are so often used in media to manipulate, sell or distort. People have sometimes asked, why read poetry, why teach poetry in schools? This is a central reason: We need words that have integrity. To write poetry is to learn to use words to tell truths, and to be able to express those truths with strength, beauty, and succinctness. We need poetry.

Poets Dante and Pablo Neruda were exiled from their countries because of the poems they wrote. Contemporary poets too are concerned with human rights and freedoms. Laila Sumpton’s poems, as her blog site describes, “explore refugee and indigenous rights.” Sumpton has edited a book of 150 poems on themes connected with human rights from poets with heritages in 28 different countries. As recently as the start of this month, protestors in Hong Kong have turned to poetry to express their struggle. In Nicole Baute’s article in The Globe and Mail, “Hong Kong writers resort to poetry amid protests to express the inexpressible,” Aaron Chan, a teacher, reads from his poem about an earlier time in the country, ‘“Extradite me to the past…When teachers could speak freely/ Without fear, though not without worry.”’ Poetry allows writers space where they can emphasize particular moments or experiences to express the difficulties, struggles, and challenges people face in the effort to protect personal freedoms. ‘“The writer can use figurative language and can also zoom into a particular image and focus on that,”’ writes Tammy Lai-Ming Ho, in Baute’s article. Ho is an associate professor at Hong Kong Baptist University and president of PEN Hong Kong. ‘“There’s a lot of creative space to use poetry to respond to what happened,”’ explains Ho.

In Edward Iwata’s August 1990 article in the Los Angeles Times, “Writing in Exile: A Chinese Tale: Authors: After the horrors of Tian An Men Square, more than 100 dissident Chinese writers have fled their home. The exiled are learning to cope and create in foreign lands,” Iwata writes, “Poets in China are widely admired. It’s not unusual for their readings to draw 2,000 or 3,000 people to town squares and auditoriums.” This is very different from America, where 20 to 30 people at a poetry reading can be considered a good crowd. Fei Ye, a writer in China’s Democracy Movement, was arrested in 1983 for a banned literary journal he printed called Lone Army. Iwata writes that, “Fei believes poetry articulates the desires of the Chinese to be free of political dogma and suffering. If poetry is killed, he said, the spirit of the people will die also. ‘“It’s a way to show our true feelings and genuine beliefs,”’ Fei said, leaning forward.’ “It’s a way to question traditional values and to wake people up. That is the start of a true revolution.”’

From Fei to Martin Espada, Haki R. Madhubuti, Claribel Alegría, Heather McHugh, June Jordan, Anna Akhmatova and Amiri Baraka, these poets and many others have written poems of dissidence against dehumanizing, oppressive forces that work to terrorize people and control them through fear. Poets aim to express what is most difficult to put into words. Poets’ work is important because through their words they can give expression to suffering, and honor people’s struggle. Their words can lift readers and listeners above the machinations of suppression and despair.

Poetry is important to human expression and has been for thousands of years. People throughout the world held back or contained by walls both visible and invisible have sought to write poetry as a way to transcend obstacles. Those detained at Angel Island wrote poems using the very walls that restricted them as the fabric for holding their poems. Thinking of this now in our present day, this work seems a particularly brilliant thing–to write poems on walls in order to allow our hearts and spirits to move beyond them.

Poems have been placed on walls in a variety of world locations–as can be observed on this site, Wall Poems. As reported on the US Embassy Consulate site for the Netherlands, In a neighborhood in the Hague, the HSV International Primary School placed several of Emily Dickinson’s poems on a wall. Additionally, David Lehman, series editor for the Best American Poetry 2019 describes how in Salerno, Italy,  the Fondazione Alfonso Gatto has written lines from the Italian poet, Alfonso Gatto on their walls, as you can see here. The Fondazione Alfonso Gatto is “committed to “the welfare of the region, in the belief that the use of expressive art can help to build more inclusive societies.” Their dedication to this endeavor is inspiring.

Words can transform us, and we can use them to reach beyond what walls us in or walls out. Using paint, pens, photos, or what ever seems most fitting and right, we can shine poetry’s light onto the walls in our lives, our neighborhoods, or at borders between places that prevent us from creating community or encountering a wider world. Poems from the book Ink Knows No Borders, edited by Patrice Vecchione and Alyssa Raymond might be a good place to start. Or even better, gather together with those in your community to identify the walls and write your own poems for them.