I’m starting another year in India. Again, as I travel the streets I see the need everywhere around me. The need has been there even though I wasn’t here to see it. There is so much need in our world today. Often, it has seemed overwhelming, so enormous that it has made it difficult to start when I consider what it is I could do to respond to it. I am learning that the enormity of the problem is not what to focus on. Instead, it’s better to focus on the small thing that I know I can begin with, and to begin there. That small thing, like a seed can grow, and the small thing can be a help to those who receive it. In our world, often what is big is valued. What is abundant is sought after. But in the world of the heart, the small thing can be enough.

Several years back, while teaching a unit on the five major world religions, I noticed how in Judaism the 10 commandments say to rest on the sabbath right alongside the command to not kill and steal. I began to wonder why so much significance was given to resting. I usually felt I didn’t have enough time to complete the work I was given or felt I needed to do. As a result, I rarely took the time to do the things that fed my soul like writing or going out in nature. I felt I was only living half of a life.

Earlier, I had read portions of Wayne Mueller’s Sabbath, Restoring the Sacred Rhythm of Rest and Renewal. The book planted an important seed and was a voice that enabled me to see that the unrest I was feeling about the obligation to work almost without ceasing was actually something others were experiencing as well, and that such an approach to life actually causes a kind of violence–an inner disturbance which can then be transferred outwardly into our lives. In his book, Mueller quotes Thomas Merton who said, “The rush and pressure of modern life are a form, perhaps the most common form, of its innate violence. To allow oneself to be carried away by a multitude of conflicting concerns, to surrender to too many demands, to commit oneself to too many projects, to want to help everyone in everything is to succumb to violence. More than that, it is cooperation in violence. The frenzy of the activist…destroys his own inner capacity for peace. It destroys the fruitfulness of his own work, because it kills the root of inner wisdom which makes work fruitful.” Reading that for the first time stopped me short. There was a deep truth there that called out to me, and I know I needed to learn from it.

I had aimed to take time for myself on many occasions in previous years, but always eventually caved in under the pressure of work. This last time, however, I read several other books: Mudhouse Sabbath: An Invitation to a Life of Spiritual Discipline, by Lauren F. Winner, Keeping the Sabbath Wholly, Ceasing, Resting, Embracing, Feasting, by Marva Dawn,  excerpts by Abraham Joshua Heschel, The Sabbath: Its Meaning for Modern Man. I also found the Sabbath Manefesto, a site encouraging people to unplug from their computers. The reading helped me to make the commitment to a day of rest and renewal. This time the commitment to time for rest and renewal has stuck.

Most of us want to do something to help make the world a better place, and as Desmond Tutu, Jim Wallace, and others on this short video describe, it doesn’t have to be something big. Small things matter. We don’t have to feel guilty about what we’re not doing or if we are doing enough. What matters, I think is not how much we do, but what we do with an open heart. Relationship matters. I’m struck by what Wayne Mueller says in this short video about what is enough. We can only hold so many eggs he says, and at a certain point, we try and hold one more egg and something will get damaged. “We can only love well, kindly, thoroughly, a very few number of people in the course of a human life.” Mueller explains, and he goes on to suggest that what we do with our lives, instead, is to hold a crucible of something small and true, to offer not miracles, but ourselves. This a place we can give something that is real and valuable. In that giving, he implies, is something of meaning, something true.

I like the way Wendell Berry’s poem below, explores the idea of how we can be stirred, from time to time, to begin something new, to go elsewhere. How often has it seemed that doing something more or moving on could be an answer to the dilemmas of life we are facing. Sometimes that is the right thing to do. We see as the poem moves on, however, that the place the speaker of the poem ends up actually going to is in his mind–to a quiet place where he can think, or not have to think at all–and instead, he watches light filling the space between leaves. This is the sabbath time, space among leaves where wakefulness can occur.

The Thought of Something Else
Wendell Berry

A spring wind blowing
the smell of the ground
through the intersections of traffic,
the mind turns, seeks a new
nativity—another place,
simpler, less weighted
by what has already been.

Another place!
it’s enough to grieve me—
that old dream of going,
of becoming a better man
just by getting up and going
to a better place.

The mystery. The old
unaccountable unfolding.
The iron trees in the park
suddenly remember forests.
It becomes possible to think of going

—a place where thought
can take its shape
as quietly in the mind
as water in a pitcher,
or a man can be
safely without thought
—see the day begin
and lean back,
a simple wakefulness filling
perfectly
the spaces among the leaves. 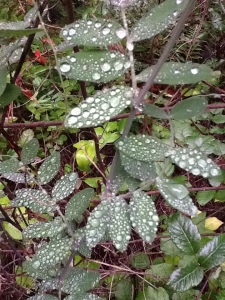