The great story weaves closer and closer, millions of
touches, wide spaces lying out in the open,
huddles of brush and grass, all the little lives.

–William Stafford, from “Over in Montana”

Bodhgaya, India, is the place where the Buddha attained enlightenment after forty-nine days of meditation under the ficus, otherwise known as the Bodhi tree, a tree related to the mulberry. Because Bodhgaya is a place of historical significance,  I wanted to visit it while living in India. Two weekends ago, I had that opportunity.

The Bodhi tree is a ficus religiosa . Its leaves, even without a breeze, are said to be continuously moving. “O Ashvatha, I honor you whose leaves are always moving…,” says a verse in the Bhagavad Gita about the tree. Gods are thought to live in the leaves causing them to move, and thus the official name, ficus religiosa–the religious fig. The name fits, in particular for the bodhi tree in Gaya. Though the tree standing in Bodhgaya now isn’t the actual tree the Buddha sat under, it’s a relative. Sanghamitta, the daughter of the 3rd century BC Indian emperor, Ashoka’s, brought a branch of the original tree the Buddha sat under to Sri Lanka and planted it in Anuradhapura. The original tree was destroyed, how is uncertain. There are various versions (see more here) of how this occurred, though most accounts state that the a shoot from the Sri Lanka tree was brought back to India and replanted at the original spot.

Bodhgaya is a holy site and a pilgrimage destination. One of the things that struck me the most while in Bodhgaya, was how many distinctive faces I saw as I sat near the tree, observing as people made their circumambulation around the shrine. Many visiting were monks and nuns performing ritual prayers, but others were like me, there to stand in a place considered holy, and to absorb what it had to share. For all the crowds, the place still manages to have a sense of calm, probably because so many there are intent on doing their prostrations and sending up prayers. 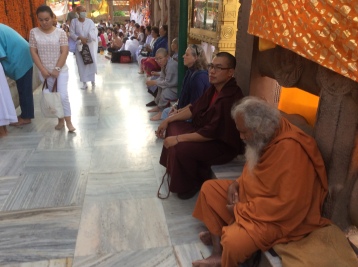 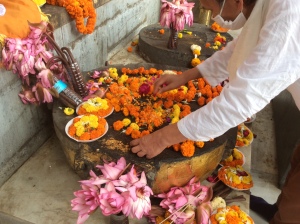 It struck me how similar people are in the way they express devotion or carry out holy acts, though they are from different religions. Burning candles and incense, offering prayers, bowing down, ringing bells, bringing flowers,–these are commonly used in acts of worship in many religions. Bodhgaya attracts a wide spectrum of people from Buddhist countries, but people from many walks of life and countries in various parts of the world had come to stand in the spot where so many before have journeyed to send up their hearts’ longings–or possibly to set them down. Possibly, however, some pilgrims had come simply with an openness, willing to receive whatever understanding their minds brought to them while standing there, listening to their heart’s inner whisperings.

I’ve been learning about Buddhism, since arriving in India nine years ago, and somehow I expected to feel moved while standing in such a holy place. Instead, I found myself noticing people’s feet, and thought of the many journeys people had taken to arrive at this place where our lives briefly intersected with a smile or a short glimpse. 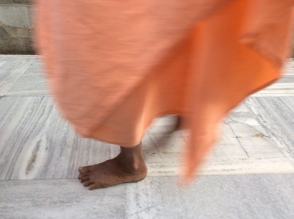 Once surrounded by forest, Bodhgaya it is now a city with apartments, shops, restaurants and hotels. To imagine the place as it was when the Buddha spent time there requires you to stretch your imagination. People continue to come to this place, because they wish to make a connection with the long chain of seekers, hoping to gain insight into how to live.

Pilgrimages are taken for many reasons, but one important reason is to the desire to expand beyond the boundaries one currently lives in– to break through the skin into something new, perhaps as the snake does when it sheds its old skin because it has grown bigger. Thoreau, purposefully set out to let his soul grow bigger when he spent a year living outside of Cambridge, Massachusetts on Walden Pond and wrote his famous meditations on living known as Walden. Thoreau speaks to the those of us who have felt the desire to step out of the hamster cage of events that keep us continuously rolling, and who long to live meaningfully. “Every man is tasked to make his life, even in its details, worthy of the contemplation of his most elevated and critical hour,” Thoreau asserts, and we are led to explore the idea that every life is worthy contemplation, of spending time reflecting on what our actions mean. This act isn’t meant to benefit just a few lucky ones who can take the time off to do so. We can do this daily as when we give our full attention to whatever it is we are doing, wherever we are walking or sitting. Listening deeply to those we are in relationship, listening to the world we walk through allows us to sense the holiness of life itself underneath the surface of all that is. 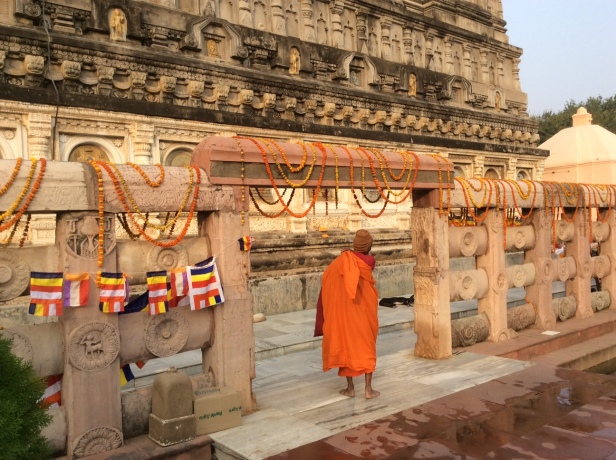 a pilgrim to the Buddha’s cave

While wandering through the temple grounds at Bodhgaya, I read a quote on a plaque. The quote’s first portion eludes me, but the second portion read something like “Now I enter the forest of my old age,” and it struck me as a metaphor for transformation in general. We may have been walking through a plain before where things could be easily seen, but when we change, we enter a forest. Things aren’t necessarily easily found or understood. Perhaps we are even purposefully looking for a different path from the paths we once knew or walked. A whole new life can appear. As we age, though, I think of forests in the fall, flames arising from the myriad leaf faces, the sugar inside burning before the leaves let go to the earth.

Thoreau chose to go to the woods, and set aside a year to live in a small cabin on Walden Pond. Many of us can’t do that, or at least don’t feel it’s possible until reaching such an age where regular work ceases. Thoreau bravely took time out to consider to look for life before old age.  Thoreau chose to live simply during his year away, in order to find what it is that matters in life. He went to the woods, he said “because I wished to live deliberately, to front only the essential facts of life, and see if I could not learn what it had to teach, and not, when I came to die, discover that I had not lived. I did not wish to live what was not life, living is so dear; nor did I wish to practice resignation, unless it was quite necessary. I wanted to live deep and suck out all the marrow of life, to live so sturdily and Spartan- like as to put to rout all that was not life, to cut a broad swath and shave close, to drive life into a corner, and reduce it to its lowest terms, and, if it proved to be mean, why then to get the whole and genuine meanness of it, and publish its meanness to the world; or if it were sublime, to know it by experience, and be able to give a true account of it in my next excursion.” This is a brave statement. It requires an openness to life, to what you might understand if you listen to the world around you, including listen to the physical world.

The Buddha, as well, encouraged people to let go of their attachments in order to find life. We may be born in one place, have a particular history or speak a certain language, but we need each other’s differences. The interconnected nature of our physical environment itself demonstrates this reality. Other people in other places with perspectives different from our own have experiences worth listening to, insights worth understanding. I notice fear is such a strong motivating force in the media but it creates so much suffering. The Buddha’s path began with a question, “How do I relieve suffering?” What if we were to live differently? What if everyday in recognition of life’s dearness we deliberately asked “How do I live so I learn what life has to teach me today? How do I live today so that I don’t discover when I come to die that I’ve never lived?”

James Wright, in his poem “The Blessing,” shows the reader what it is like to live attentive to the details before us as he describes his encounter with ponies off the side of highway in Rochester, Minnesota who “have come gladly out of the willows/ To welcome my friend and me.” The ponies greet he and his friend with “shy bows,” then begin munching the grass again, as they have been all day. As the speaker of the poem carefully observes them, he becomes aware of the wonder breathing beneath the experience, “…Suddenly I realize/ That if I stepped out of my body I would break/ Into blossom.” We become more than we are when we let ourselves experience that we are connected to all that is.

May we all break into blossom.