I’ve loved this poem by Jimenez since the moment I first read it several years back. I love the rhythm and the way Jimenez uses repetition. I love how the sound of the poem read in Spanish so perfectly complements the ideas. It is fully beautiful; beautiful like spring. 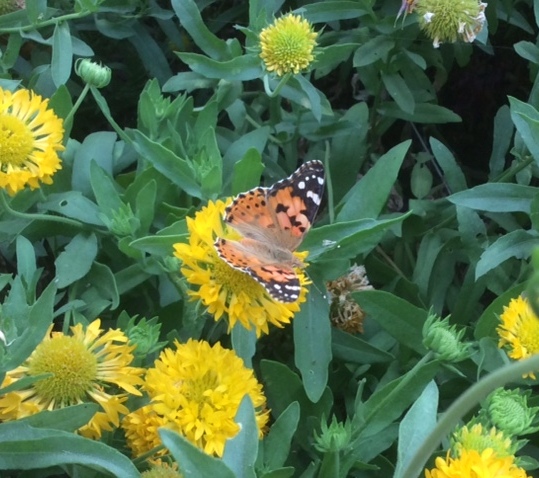 April came, all
filled with yellow flowers.
Yellow the stream,
yellow the fence, the hill,
the children’s cemetery
the orchard where once love bloomed.

The sun anointed the world yellow
in its fallen light;
Oh! for the haloed irises,
the gold-lit water, warm;
the yellow butterflies
over the yellow roses!
Yellow garlands scale
the trees; the day
is a grace perfumed with gold,
in a golden awakening of life.
Between the bones of the dead,
God opens his hands of yellow.

Yellow wasn’t my favorite color growing up, though it was my younger sister’s. She looked terrific in yellow, wore it often, and her room was yellow as well. Yellow was a nice enough color, but somehow too bright, too loud like brass horns. Over the years, however, I’ve come to appreciate the color yellow. When you see wide fields of sunflowers blanketing rolling hills in Italy, holding their golden faces to the summer sun, their beauty and the way they lift the heart can’t be denied. Similarly, when walking down Sorrento’s streets with gold and ochre painted buildings sitting above the sea, and lemon groves growing on the hills, the lovely tablecloths and ceramics with lemon designs displayed in shops along with Sorrento’s appreciation of limoncello, it’s easy to grow an affection for the color yellow.

Because I’m currently writing poems about food, I’m also exploring some of their history and stories and the lemon has an interesting history. I grew up associating the fruit with California, as it is a citrus, and California is noted for its citrus groves that date back to the 1840’s in Los Angeles area, though citrus fruits were first brought to California by Spanish missionaries in the 1700s. The word is of Persian origin, limun, and entered English through Old French, limon, related to the Italian limone. My parents had a lemon tree growing at our house when I was a child, along with a grove of orange trees.

I also associate lemons with the Mediterranean because of the fairly warm climate there. Its origins are further east, however. Though its exact origins are a bit unclear, they are thought to be India, the country where I currently spend most of my year, in the Assam region near the Chinese border. Over time, the fruit made its way into Persia and then on to the Mediterranean, carried by Arab traders into the Middle East, North Africa, and then southern Italy before entering the rest of Europe during the time of the Crusades . At first, the lemon was used as an ornamental plan as well as medicinally. Currently, according to the New World Encyclopedia, Italy and the US are the world’s leading lemon producers.

My husband’s grandmother drank a glass of lemon juice with water in the morning to aid digestion. The fruit’s juice has antibacterial qualities, and is thought to be good for the skin. It also tastes incredibly delicious in homemade lemon pasta (see a recipe here) that I’ve made together with my husband. If you happen to be in Rome, aim to try eating the lemon pasta at  Vladimiro Ristorante, Marcello, 39 06481 94 67 Via Aurora 37 (Via Veneto), 00187 Rome, Italy. The sauce of rich cream with lemon is truly memorable.

In addition to all mentioned previously, Citrino is my surname, which I believe means yellow like the stone, citrine. Possibly the surname means citrus, though, too, as the origin of the English word citrus is Latin and refers to the citron tree, and the citron tree has a fascinating history. You might be most familiar with the citron fruit as part of fruitcake you’ve eaten. The LA Times writer, Jeff Spurrier, explains in his article, “Growing the etrog citron, A tree full of symbolism” that the “etrog citron (Citrus medica) is a fruit with thousands of years of human use.” Originally also from India’s Assam region, the citron is a separate species from the lemon according to Encyclopedia Britannica. Helena Atlee in her book, The Land Where Lemons Grow: the Story of Italy and its Citrus Fruit, explains how the citron fruit is used in the Jewish observance of Sukkot and is one the oldest of cultivated citrus trees. According to Spirrier’s article mentioned above in the LA Times, archeologist found the citron’s seeds in Mesopotamia dating back 8,000 years. The citron may even have been the fruit referred to in the story of the garden of Eden, not the apple!  A thorny tree, the citron grown in Italy is from the region between Tortora and Diamante, an area that is even referred to as the “Citron Riviera.” You can read more about this plant and its history here, and even more here with a detailed horticultural origin analysis if you’re curious.

Especially noted for its wonderful scent, Atlee, in her book, The Land Where Lemons Grow, describes her attempt to make a broth with the citron following Apicus’s ancient recipe. Not willing to sacrifice the entire fruit to the broth, she cut off the fruit’s tip and suddenly, she noticed the air was “drenched with perfume. By cutting the rind I had released essential oils from the pores just beneath its surface, and the smell of violets that comes from a citron’s outer skin had been replaced by a scent reminiscent of crushed geranium leaves in the sun, mixed as ever, with warm but indefinable spices.” Reading that description made me want to travel to find the fruit just so I could smell it!

Though the tree is too bushy to provide shade, though its is wood brittle and not good for building or adequate for burning, though its fruit isn’t particularly pleasant to eat, and though it fails at possessing qualities for most any practical use, it does have something nearly miraculous going for it, Atlee explains. It produces its huge globes of fruit at the same time it bears “a full cargo of beautiful flowers.” Not only that, wood, flowers and fruit, in essence, the whole of the tree is perfumed, and the fruit seems to never decay–all qualities giving it interest and respect from ancient people.”(The Land Where Lemons Grow) According to the Online Etymology Dictionary, citron was the first citrus fruit cultivated in the West.

Another type of citron with additional unique qualities is the Buddha’s Hand citron which has multiple finger-like sections, somewhat resembling a flower. The fruit appears in paintings on India’s Ajanta cave walls. It, too, isn’t a fruit with much to offer regarding taste, though some research supports its medicinal benefits demonstrate it contains anti-cancerous, and anti-inflammatory properties, as well as possibilities to slow the development of both Alzheimer’s and diabetes. (See more here.) Though fussy about its conditions, the citron is a unique food with a fascinating history and I will have to search out finding one. Luckily, I’ve discovered someone in my county is growing them and they are for sale at Santa Cruz County farmers’ markets!

I am grateful to those who first carried the seeds for these fruits to their homelands in the Middle East, and the gifts they have been to so many for so many centuries. The interconnections between India, Italy and California in the history of lemons and citrons, are surprising and wonderful to learn. The discovery makes me curious about what other ways our lives are connected beyond the boundaries of what we know or understand.